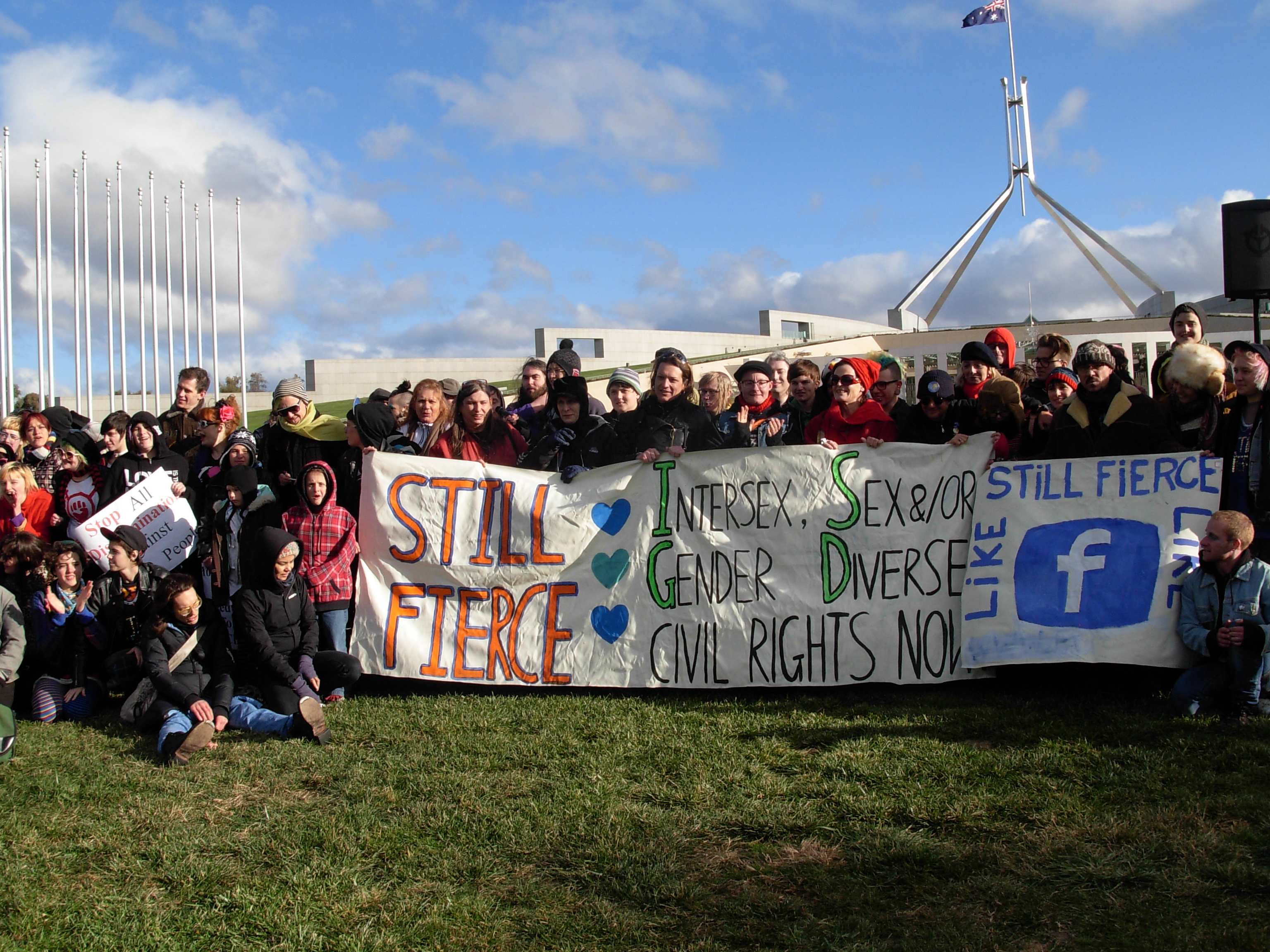 Two buses of ISGD people and allies travelled from Sydney. A bus arrived from Melbourne and 10 activists flew from Brisbane to attend the important action, undeterred by the cold, windy weather.

Intersex, transexed, transsexual, transgendered, genderqueer and androgynous people and people without sex and gender identity spoke of their experiences of discrimination, harassment and violence. The rally highlighted the need for equal treatment under federal and state laws.

ISGD activist group Still Fierce was the key organiser of the rally. Co-founder of Sydney Still Fierce, Griffen Jones, told the rally: “We are making history here today. I look forward to the time when those of us who are from rural places can return there and be welcomed instead of harassed.”

Sex and Gender Education Australia’s Tracie O’Keefe said ISGD people should get full Medicare rebates for their medical needs: “We want full Medicare for ISGD people – we don’t want a penny less. If you have a heart transplant it’s covered by Medicare, same with a hysterectomy. Why can’t you have it for sex and/or gender health?”

Social justice activist norrie mAy-welby rose to international fame in 2010 as the world’s first person to have their official documents stating “sex not specified”. The NSW Department of Attorney General later withdrew the document and norrie continues to fight for its reinstatement.

Norrie told the rally: “Since I went public with my experience, I’ve heard from people across the globe who also want a ‘sex not specified’ document. It’s resonated with people from many places, including Iraq and Russia.”

Zoe Brain, an intersex person and Australian National University lecturer, said that ISGD people and groups such as Still Fierce were making a difference. “People are working on things now and listening because of your pressure.”

Ava Bishop told the rally her story. She was born in 1956, raised on a farm and diagnosed as a male-to-female transsexual at the age of 21.

She had gender reassignment surgery at 23, joined a church and at the age 30 went back to trying to live as a man.

But after 18 years she could no longer hide who she really was. She re-transitioned at 48 after being severely depressed, anxious and suicidal due to abuse and being raped a year and a half ago. She moved many in the crowd to tears.

Conor Montgomery also addressed the rally. Previously, Conor identified as a female-to-male transexed/transsexual man, and now is just a man.

He became front-page news in NSW in 2010 when he launched a case against the NSW Attorney General’s office because it advised him not to apply to change his birth certificate to male from female, because he had not had genital surgery.

Montgomery roused the gathering with the cry: “This is just the beginning, let’s remain fierce! We will be back!”

The rally demanded the implementation of the Australian Human Rights Commission Sex Files (2009) recommendations, legal protection against enforced medical treatment of ISGD children, federal anti-discrimination laws to protect all ISGD people, full Medicare funding for medical and psychological procedures available to all ISGD people, full marriage rights for ISGD people, and that the government enshrine the right for a person to establish their own sex and/or gender identity in federal law.

Activists presented a memorandum of six demands to representatives of Greens senator Sarah Hanson-Young and requested she present them to Prime Minister Julia Gillard.

Another activist in Sydney’s Still Fierce, Jade, spoke about her support for full marriage equality. Jade is unable to have her primary identity document, her birth certificate, issued in her new identity because she is still legally married to Sandra, who she has lived with for 10 years.

Mish, an ISGD sex worker from Scarlet Alliance, the Australian sex workers association, relayed the discrimination trans sex workers face, and called on the rally to support the decriminalisation of sex work.

Labor senator Louise Pratt spoke with representatives from the rally, telling them that several federal politicians were looking at the issues they raised.

The rally attendees described it as a profoundly positive milestone experience and vowed to continue their fight for equal civil rights for all intersex, sex and/or gender diverse people regardless of their identities.

Rally organisers announced a new national ISGD project that would include organisational and individual membership working toward political, legal, medical and social change.

A full list of the demands can be viewed here.