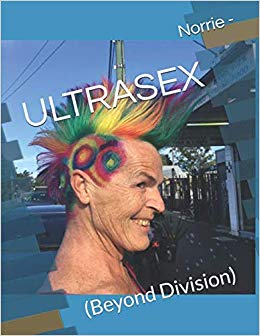 A co-founder of SAGE Norrie has released their autobiography. It is a journey of a life-time of overcoming other peoples’ opinions of what Norrie’s sex and gender should or should not be.

A riveting, revealing, revelation tells us Norrie’s journey of becoming the first person registered as ‘sex non-specific’ busting Australia’s patriarchal tradition of men as leaders and women who follow behind. The real adventure here for me thought was Norrie’s journey to becoming Norrie. What a runaway ride of having been male, female and then neither. Not only surviving the endless discrimination they faced but going on to triumph over and beat the established that oppressed them through sheer determination.

Born in Scotland and emigrating to Australia as a child Norrie, raised a boy, found life rejected them as effeminate gay man. It was harder to get boyfriends and most gay men wanted partners who were more masculine and stood out less in Western Australia where it was still illegal to be gay.

Hanging out with drag queens Norrie began performing on stage and found more acceptance and appreciation in playing female roles, ultimately being befriended by transsexual women, who showed Norrie how to appear more feminine. This lead norrie to adopt the idea that life would better as a women going through with what in those day what was known as a sex change, including genital surgery.

On the other side Norrie found life as a woman equally as hard and failed to adjust to living the rest of their life as a female. In fact, they went through several revelations that brought them to a position of living as neither male nor female or alternatively both, not through confusion but choice, rejecting the binary sex model.

Along the way Norrie became a poster person for people who do not clearly identify as male or female being involved in activism, writing in the press, protesting, helping form new laws and being the center of a case in the High Court of Australia to claim their right to be ‘sex non-specific’ registered. On wining the case they became the lead news story throughout the world challenging the solely male and female status quo.

Battle worn the consequences however of being the only Norrie in the village carried with it the stress of discrimination that also effected Norrie’s everyday life encountering exclusion, oppression and at times the kind of economic struggles that come with demonising a particular group of people in a so-called civilised society.

Ever politically active now days Norrie, a devout Christian, can be seen floating around Sydney with streams of bubbles emerging from the back of their electric bicycle, going from one political protest to another. If the subtitle of this book were ‘never give in defining who you are’ it would be justified in described Norrie’s continuing journey.