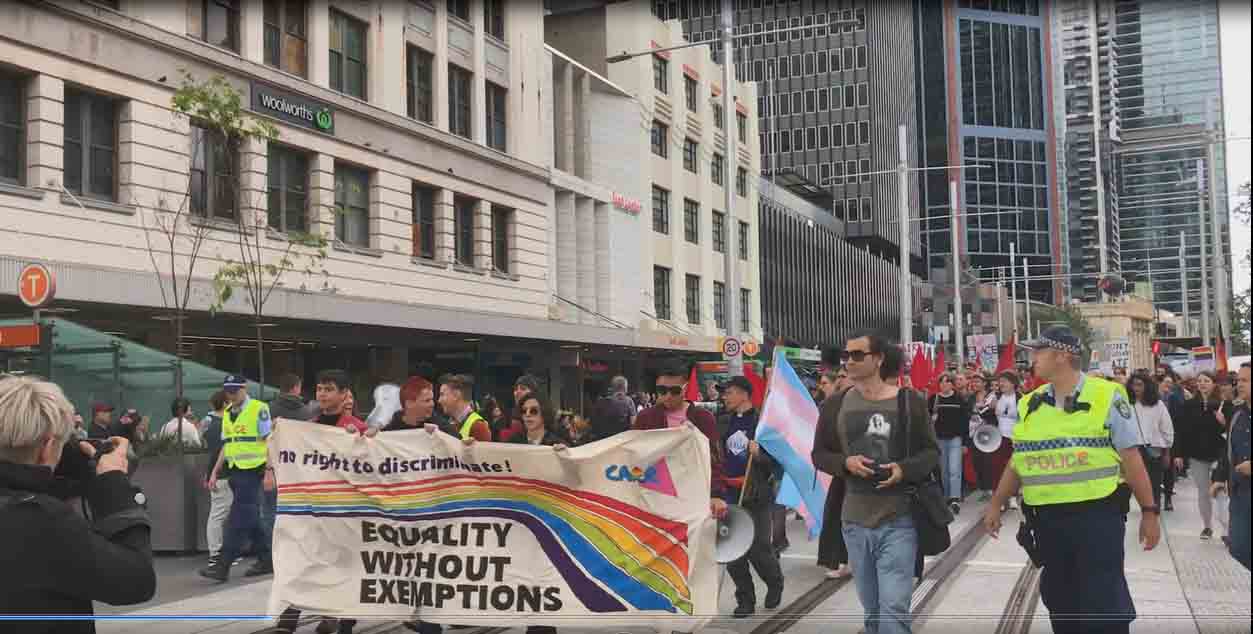 The weekend saw five marches in five cities across Australia against the proposed religious anti-discrimination bill, including Sydney, Melbourne, Perth, Canberra and Brisbane.

Sex and/or gender diverse groups of people joined gay, bisexual and queer people to raise their concerns about the exclusions in the proposed bill that would allow all religious people and organisations to discriminate against such SGD groups and people. 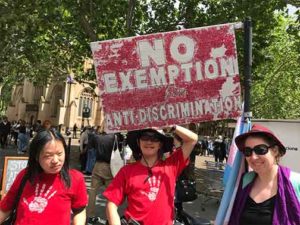 The exemptions for religious people in the bill would, in fact, wipe out many present anti-discrimination laws and allow religious people and groups to refuse service, accommodation, medical services, education and far reaching accessibility to a wide range of people, including women’s services.

The religious group or person would not even have to prove that someone is from a sex and/or gender diverse group but simply just perceive that they are. It would be like saying to someone: “I think you are from Mars so I am going to discriminate against you. I can’t prove you’re from Mars but in my mind, you are, so I should have the right to discriminate.”

This would give people of religious beliefs rights to discriminate that other Australians do not have, simply because they believe in the supernatural. It is clear that those who voted no, and lost, during the marriage equality plebiscite are behind pushing for these laws. The ‘yes’ result of the plebiscite also indicated that the majority of Australians do not want or believe it should be legal to discriminate against sex, gender and sexuality diverse groups of people.

The Coalition Government, however, has a number of senators who are extreme right-wing Christians who wish to impose their religious values on Australian laws even though we are a multi-cultural society. Similar moves have been happening across North America where violence against and murder of sex and/or gender diverse people has skyrocketed in recent times. 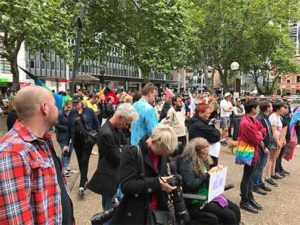 Many Australian minority groups are now panicking for fear that the anti-discrimination laws are in danger of going backwards to where religious people got away with a whole range of abuse against the rest of the community and particularly vulnerable minorities.

Whilst the time for submissions towards consideration of the bills are now closed, and at some stage it will be going forward to the senate for debate, ultimately it will come down to the number of majority senators voting. Whether some of the coalition will be willing to vote against the government on the bill will be a matter for history.

There is little doubt this bill is driven by the coalition trying to keep religious voters on side for the next election. The Prime Minster Scott Morrison’s connections to extreme right-wing Christian groups is public knowledge along with his frequent transphobic public statements. He also did a U-turn after the election, having previously said he would protect sex and/or gender diverse groups from discrimination.

During the time of the debate it is likely the marches will continue along with a wider public debate and a test of whether Australia really is a country where all citizen truly deserves equal rights.