We began the project in 2018 with people from sex and/or gender diverse (SGD) groups telling us how they overcome suicidal thoughts with SAGE’s Life Over Suicide Project. After that we intended to carry out and publish research on suicide in SGD groups but we felt that was not a big enough project to fulfill SAGE’s remit which is to promote the human rights and dignity of people from SGD groups.

On examining what was needed we decided the weak link in the chain, for suicide rescue services for SGD groups, was a lack of available health services and poor training of health care professionals. If you were suicidal in some areas it took six months in Australia to get an appointment with an appropriate mental health care professional. This was unacceptable. If other parts of the world there may be no services at all.

When you get an appointment and go to see that professional, they may not have had the training that allowed them to understand your issues coming from an SGD group. So, for many that suicide risk was still elevated at times to more than 20 times the national average. If you managed to delay suicide you could remain presuicidal for years in a deep state of depression and post-traumatic stress disorder, unable to work and living in isolation being socially excluded.

Not everyone can afford private care. In fact many people from SGD populations suffer such a high level of minority stress the vast majority tend to live on the poverty line, struggle with housing needs, excluded from equitable education and work. The only option they have is state provided health care and charity help which does not presently meet their needs.

The project also examined the international situation where in countries in Africa, the Middle East and India there may be no health care services at all for SGD groups. America, which has an extreme poverty problem, is basically a pay to play health care system and in Nottingham in the UK people have to wait six years for an appointment at a gender clinic.

What also came out of the research was finding the patriarchal bourgeoisie medical approaches that dominates the care of people for SGD groups, particularly mental health. This leaves many patients with a great mistrust in the care they are offered so they do not engage with those services and suffer a downward spiral of mental health that leads to suicide.

So, it became clear at the beginning of the research to be in line with SAGE’s mission we needed to put information out there to help health care professionals and project managers create better services for people from SGD groups.

Naturally we are also big supporters of community care and peer support because a government can never fully cover the needs of society and certainly not minority groups. As people for SGD groups, we need to overcome our own prejudices and differences reaching out and take care of our own.

Care for anyone who is suicidal is essential but care for people who are from SGD groups can be very sparse or not available at all. Where there are services people have to wait for months for an appointment. When they get one, they are often faced with health care professionals who know very little about their situation or needs.

This is why during the early part of the three-year research project we decided to focus our efforts on education for health care professionals and service providers; because this can be the first port of call for many suicidal people for SGD groups. When health care is sparse or poor-quality suicide can seems a better option when you are distressed.

As a mental health professional, intersex and trans women myself I have seen five decades of successes and disasters in suicide prevention in SGD groups. So, I understand that government cannot provide all the services needed so we also recommend building community networks where peer support can bring a sense community to those who are isolated and wrestling with suicide. 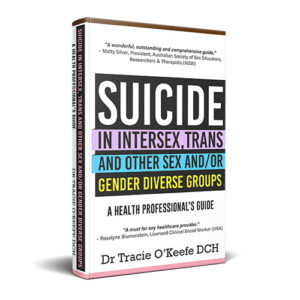 If you want to get involved in voluntary community suicide prevention for trans and intersex and trans people or have technical SEO skills contact us at SAGE.

Email us at SAGE email: sageaustraliateam [at] gmail [dotcom]. (Replace [at] with @ and [dotcom] with .com)